Several measurement schemes can be used for optical sensing depending on the exact application and conditions.

This technique is used in most of our evaluation systems and sensor modules.

2-channel measurement scheme with 1 LED and 2 PDs (measuring and reference)
This scheme includes an additional PD apart from a measuring LED-PD optopair. The additional photodiode is a reference one and is introduced in order to compensate influence of irrelevant effects unrelated to the analyte absorption. Measuring photodiode provides the measuring signal sensitive to presence and concentration of analysed matter, while signal from reference PD remains practically unaffected. Processing of measuring and reference signals allows obtaining stable and reliable measurement results even in harsh temperature and environmental conditions thanks to the fact that photodiodes react in the same manner to the external conditions.

This scheme can be realised using 2 approaches:
a. reference PD has the same sensitivity spectrum as the measuring PD and is deposited close to the LED, thus ensuring the minimal signal attenuation due to short length of an optical path: 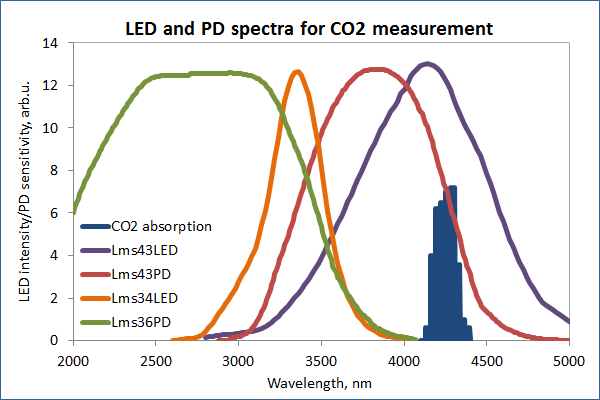